The Reflections on the Paul Gauguin Exhibition 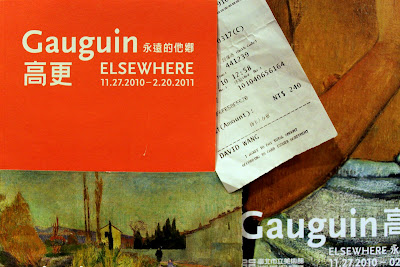 I posted this image with my ticket and credit card receipt in order to prove my attendance and appearance to the exhibition since I visited the museum on my own. Even though I went by myself and had no classmates to accompany with me, I still find this exhibition quite interesting and it sure comes with a full blast. At first when I just arrived at the museum, most people were there for the Flora Exhibition instead of traditional oil paintings, I have to admit that the Flora Expo is awesome just by walking pass the gates. Despite that, during the exhibition of Gauguin, I found that there are series of new and different kind in perspective of what a man can think and do. He surely is an interesting man and made very different decisions than other painters and everyone else in the world, as he left the city and to live with the nature…

As I thought about what he did, it actually made sense, perfect sense, and generally became a great decision that everyone else should have done the same. The reason is, if we all step back from all the hazards and troubles we encounter everyday, each and every inch, to enjoy and embrace the great nature around us, then, perhaps our human history with not be as violent as it seems. Maybe WWI, WWII, Iraq War, Terrorism, global warming, pollution, racism, so on and so forth wouldn’t happen. All because of the intense industrial world we live in today, the society and perception that tells us “we are behind tomorrow, we are behind technology, we need to boost our economy, we need nuclear weapons, we need…on and on” Just like Domino, where we all flow into one pot because the people around or behind us are telling what is right and what is true. But, Paul Gauguin denied and had a thought for himself, his own idea, perspective, therefore making a decision of “his own” than following others. I personally think this is the spirit each and everyone of us need inside of us, to respect other opinions and to have your own opinion at the same time.

Following through his art works, I observed different changes of his style through the decades. As I saw, at first he was trying best like most other foundational artists would do, painting what they see and make everything as realistic as possible. Then, when mature the skills like other artists such as Van Gogh and Paul Cezanne, he became and considered by the public of “Post Impressionist painting style” in painting what they can capture of light, shapes, and shades in some what realistic and stylish on there own way. Then finally, I saw a big turn over after he embraced the nature, the full blooded, bold, and pure wild and uncensored way. The kind of art that runs above freedom and creates his own way of making them, I believe that he is totally free from the rest of the world and he has no trouble and worries in anything.

Therefore, I believe the spirit that Gauguin possesses introduces us to a whole new level of thinking. Take a deep breath, think, and re-think, over and over again, will help us generate a more mature thought in order to produce a more mature decision. Should we all start to appreciate what the nature has done for us instead of challenging it and take it for granted? Perhaps this is something we can all think about, the future.